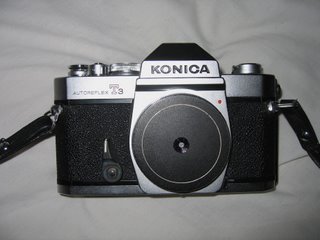 I promised a while ago I would post the exact details of how I'm using my Autoreflex to shoot pinhole. First off, I have to say that the Autoreflex is a great choice for pinhole shooting. They're cheap like borscht on ebay, because you can't easily get batteries for them any more. This leads to benefit #2: the Autoreflex T, T2 and T3/T3n bodies have completely mechanical Copal shutters, from 1/1000 right on down to "B" (avoid other models, like the "TC" which has an electronic, i.e. battery-dependent, shutter). This means that you don't need a battery, unless you want to use the meter, which generally you don't -when was the last time you used a TTL meter for pinhole? :o) (BTW, get a T3n if you can - it's a sweet SLR, one of the best Japanese SLRs ever made. It also has an easy-to-use multiple exposure lever - very handy for pinhole creativity). The third benefit is that lenses for these cameras are also dirt cheap, and some of the best glass available. This means that you not only get a great pinhole camera, you can take lens shots on the same roll whenever you want. The 50mm f1.7 lens is one of the sharpest SLR lenses ever made - eat your heart out Leica. The 40mm f1.8 "pancake" lens is also very sharp - and very portable to boot. Check out the "Konica Autoreflex" link on the sidebar for more info at an excellent site. 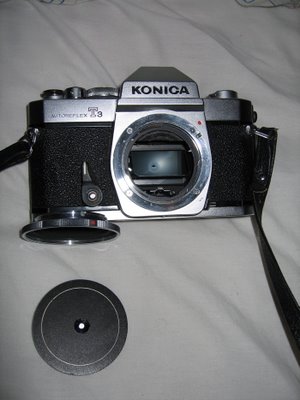 On the downside, they're built like tanks and heavy. Still, this means they've survived, and the weight keeps 'em still for long exposures...

Back to pinhole photography. The standard approach would be to use a body cap - but I've never owned one, so that wasn't an option. I did have a set of manual extension tubes, though. They are a series of black tubes that thread into a bayonet mount adaptor. There is another adaptor at the end you use to mount a lens. The other item I had available was an old-style 55mm thread-in metal lens cap - the kind that screw on like a filter.

Then I had an epiphany - the extension tubes are also 55mm in diameter, and use the same thread pattern - after all, there is a reversing tube that fits the filter thread of a 55m diameter lens as part of the set! Sure enough, the metal cap threads onto the ends of the non-reversing tubes just fine and makes a light-tight connection.

The upshot is, after mounting the pinhole in the metal cap, I can choose from many different focal lengths at whim, just by swapping tubes in or out. I tend to be a wide-angle type, so generally I've just used the bayonet adaptor in the camera with the cap screwed directly into it - a distance of about 45mm. All the tubes put together come out at around 90mm, and there are various intermediate combinations possible. Quite a versatile system, especially if one had extra metal caps with appropriately-sized pinholes for each distance. Guess what I've been after on ebay these days? Maybe this will increase demand for Autoreflexes and manual extension tube sets - although a body cap and a set of bayonet extension tubes would accomplish the same thing with any SLR. That picture of the extension tube set is off a current ebay auction if you're interested - but you'd better hurry!
Posted by Dennis Venema at 9:54 PM

Nice to see someone using good ole Konica SLRs in unusual ways. I share your excitement about the old mechanical SLRs from Konica but I must point out that the Autoreflex TC does not have an electronically operated shutter. Its batteries are only needed for the meter, like with the T3N. Konica's first camera with an electronic shutter was the famous FS-1 (1979), the world's first SLR with an incorporated winder.
Anyway, you seem to be having fun. Some people... :-)
Cheers
jj

thanks for the update- I've never actually owned a TC, so I must be mistaken.

My brother found a Knoica Autoreflex T3N SLR at a garage sale in perfect condition, with a price tag of $5.00. The lady was packing up, and just gave it to him for free. It still has it's Hexanon AR 50mm f1.7 lense, and it's also working perfectly.

Although my Yashica 35mm had it's sentimental value (it was stolen in 2004), this camera has really got me back into real photography.

In short, I love this one.

I don't do any pinhole shooting, but it's cool to see someone else with such great cameras in these digital times.

When E-bay had first come out, I used to travel all over New England to tag sales and garage sales with my family. I learned quickly about the value of a classic Konica Minolta camera. I have found many just like this, and have no idea what has happened to them. I wish I held onto at least one of the Autoreflex devices, so I had some good equipment to work with during my newly found hobby in photography.