I received another email from Daniel over in France describing his second pinhole project. He's now used my pinhole to convert an Afga Clack to pinhole shooting. Clacks are old 6x9 cameras for 120 roll film that are popular for such conversions. This way you get the film transport/shutter/tripod mount made for you - which is easier than making it yourself. I'd love to convert a Clack someday too!

I found an AgfaClack camera on ebay for $10 it is more easy than the Horseman.

Your pinhole is now on the AgfaClack

And the photo of my résidence Compostelle at Pessac near Bordeaux

note : the film is agfa 25ISO ORTHOCHROMATQUE. (appropriate choice of film for a Clack!)

Your pinhole (in french sténopé) is very good !
à plus
Daniel 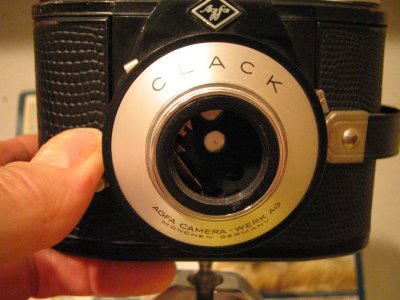 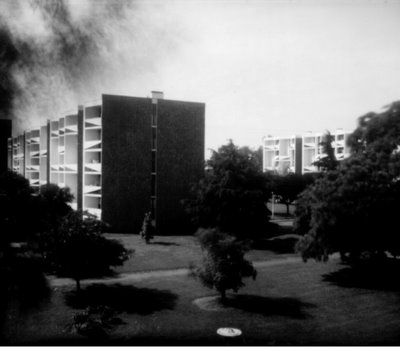 A picture taken with the converted Clack. The camera and the pinhole seem to be performing well. What a great pinhole setup!
The 6x9 neg is one of my favorite sizes (I have an old Franka Rolfix that shoots 6x9 with a 105mm Schneider lens). That camera is in far too nice condition to convert, though. Right now I have an old Foldex 20 coming from a recent Ebay win that I will be converting sometime soon. The Foldex 20 is an American-made el-cheapo folder with an awful lens - so I won't feel too bad when I destroy it!

I now have film in the new homemade folder, and I should have the test roll finished and developed in a few days. Thanks for the note, Daniel. I'll look forward to seeing some more images!
Posted by Dennis Venema at 1:40 AM

Super color scheme, I like it! Keep up the good work. Thanks for sharing this wonderful site with us.
»

Nice idea with this site its better than most of the rubbish I come across.
»